Our church in Northbay is dedicated to St Barr and is situated by the old natural harbour.   A nearby island is the home to a statue of the patron saint of the Northbay Parish who is also pictured on the wall of the church porch.

Mary Ceit MacKinnon writes…. In October 1906 St. Barr’s church was completed and the congregation was extremely proud of the building. An article in “The Tablet” of November 1907 captures the joy of the moment: “A new church, under the patronage of St. Barr, has been opened on the island of Barra.  People assembled from all parts of the island, as well as Eriskay and distant Mingulay, to assist at the ceremony which was performed by the Bishop of Argyll and the Isles. Near by are the hallowed ruins of St. Barr’s,or Killbarr, where still may be seen  the remains of an old altar, and in a recess near the entrance the holy water stoup, which tradition affirms was never known to be without water through the changing years, and times, and creeds ,bearing silent yet eloquent witness of the unchanged faith in Barra. New St. Barr’s, in every way the worthy successor of the old, was filled to overflowing by a congregation of well over 300 people. Pontifical High Mass was sung, for the first time on record in Barra, by the Bishop, with Father MacDougall, of Daliburgh, as assistant priest, Father Cameron, of Benbecula and Father MacNeill of Eriskay, as deacon and sub deacon respectively. Father MacMillan of Eigg acted as master of ceremonies. A choir of priests from Glasg

ow, under the leadership of Dr. Rogan, gave a masterly rendering of the Gregorian Mass of the Octave of All Saints, the whole ceremony being followed with the deepest devotion and interest by the pious island Catholics. The preacher for the occasion was the Rev. Archibald Campbell, S. J. of St. Joseph‘s Glasgow, so well known both for his abiding interest in the welfare of his fellow Highland Catholics in Glasgow and his missionary labours in the Hebrides. The new church stands on a slight eminence at the head of North Bay. The following are the dimensions: 64 feet in length and 25 feet in width, internally 16 feet in height. It is built in a very handsome and substantial manner of native grey stone. The building presents a very pleasing aspect to the eye with its tall lancet windows six on each side, and a large triple window in the south gable. There is a very commodious porch, with a companion building which forms a neat and serviceable sacristy. The building is from designs supplied by Mr. Woulfe Brenan, architect, Oban who was likewise the designer of the Church of Our Lady Star of the Sea, Castlebay, whose massive Norman tower, with its handsome clock, commands the approach to Castlebay, and excites the admiring comments of all who call there” 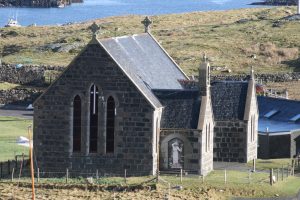 In 1901 following a series of land raids by desperate, land hungry cottars particularly from the Bruernish and Bolnabodach areas,  the Congested Districts’ Board bought from the proprietress, Lady Gordon Cathcart, the farm of Northbay and part of Eoligarry farm. The land acquired was three thousand acres and was divided into fifty eight holdings and offered to those interested in settling in the area. The land was readily accepted and the beginnings of a crofting community were established. In those early years the people there formed part of the congregation of St. Brendan’s church at Craigston but they felt that their spiritual needs would be better met if they had a place of worship in their midst. The parish priest at Craigston, Father William MacKenzie, gave them his full support. Samuel MacKinnon (Somhairle Beag) gave part of his croft at Bagh Thiorabhagh for the purpose of building a church and this encouraged others to make various contributions. Fund raising then began. When the church was finally completed in 1906 it was served from St. Brendan’s church. This situation continued until 1919 when Northbay became an independent parish and Father Joseph Gillies from Morar was appointed parish priest.

In 2006 the centenary of St. Barr’s church was celebrated, a  very significant landmark in the history of Barra.  During the past century much has happened; two World Wars and their accompanying sorrows, social and economic change and periods of prosperity and times of hardship. It is hoped that in future years the parish of St Barr’s will continue to be as vibrant as it has been in the past. The church has a peaceful atmosphere and the coloured glass windows create a serene sense of the sacred.  Visitors are welcome to spend time here in prayer.