The present-day St. Brendan’s Church at Craigston, the “mother church of the island” was built in 1857 during the time of Father William MacDonnell (1856-1867) on the site of a much older church which dates back to the years pre-1800. The church is charming, a very suitable place to go for quiet prayer.  It is said to be on the site where St Brendan the Navigator made his settlement and St Brendan himself is honoured, along with St Barr, with Slate-scratch images by Canon Calum MacNeil (deceased) to the right and left above the altar. 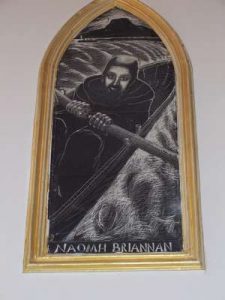 Reference is made to this building in a document entitled Mission of St. Patrick, Grand River West, Prince Edward Island, Canada by Rev. Burke 1881, which states; “This mission was first settled in 1790 by twenty eight people from Barra in the Hebrides or Western Isles of Scotland. These men were tenants of Mc Neil of Barra a Colonist who after vainly endeavouring to inoculate his tenantry with the tenets of his new religion ,became so arbitrary and despotic that he forbade their erecting a new church not withstanding the fact that their old one was insufficient to accommodate the congregation. Four men who were delegated to choose a site for the proposed church ,whilst proceeding with their duty met the laird going his rounds .An argument ensued which terminated in a decided quarrel. This was on the 9March 1790 and on the following day all Mc Neil’s Catholic tenants gave him notice that they had decided to give up their holdings and leave the country”

In 1805 Father Angus MacDonald became Parish Priest of St. Brendan’s Church and he remained there until 1825. His time there is considered of being of great importance as he was instrumental in introducing a book for recording births, deaths and marriages.  As St. Brendan’s Church was the sole Catholic church the book is most valuable as so much information was recorded in it. This was the period of emigration to Cape Breton Island and the births of the many who left were recorded there. Fr. MacDonald also kept an Account Book where he recorded many transactions and likewise this is also a very informative and interesting document. During his time there he also had the Presbytery House ” Taigh a’ Ghearraidh Mhoir” built. In the Account Book we read that in 1819 Iain MacPherson and his father, Angus ,both joiners, arrived from South Uist to work at the priest’s house at Craigston.  This is the ruined house that can still be seen beyond the present-day farm buildings beyond Craigston Church.  This house was in use till fairly recent times and older parishioners remember the buidling being used for daily Mass.

However it is evident from correspondence to Rome written by Fr. MacDonald’s successor, Father Neil MacDonald in 1830 that the church building hadn’t been renovated at the same time as the house. “No change took place as to the chapel- the people seem to be pretty keen for the measure already proposed, after hearing of the great edifice already built and finished at Iochar in South Uist by Mr. MacGregor”

In the following year he wrote; “The poverty of the people is beyond description and the chapel requires an immediate repair for there is a rent in the south west corner from the foundation stones to the slates” However a new church was finally built in 1857.

Dr. Donald Buchanan captures the importance of the occasion in his book ” Reflections of the Isle of Barra”. “However in spite of the grander scale of the Castlebay foundation, it probably did not arouse as much sentimental interest in Barra as the rebuilding of Craigstone church during the reign of Father William MacDonnell.( 1856-1867) This was a labour of love and enkindled the interest of all Barra ,as it was an “all Barra ” church .It was a replacement of an older church on the same site ,and I remember the elders of my boyhood times relating the scenes at the building; everyone lent a helping hand .Timber was collected from the jetsam on the shore and stone was conveyed from wherever it could be procured ,as far away as Sandray ,whence it was transported by boat to the Craigston beaches. Cockle shells for incineration into lime were conveyed by pony panniers from the Eoligarry shores.”

Up until the opening of Our Lady Star of 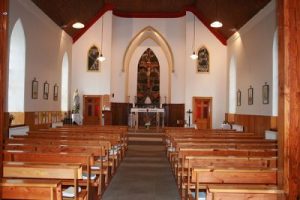 the Sea Church in 1888 St. Brendan’s remained Barra’s sole Catholic church and young and old made their way there on Sunday mornings. On 18 May 2005 the people of Barra celebrated the occasion of the bicentenary of the establishment of the parish of St. Brendan’s. Mass was said close to the ruins of old St. Brendan’s Chapel at Borve Point which dates back to early Christian times. The people then processed from this early church site to the present St. Brendan’s Church, a fitting reminder of the continuity of their faith.    Article by Mary Ceit MacKinnon.

The Vigil Mass is celebrated at St Brendan’s Church in Craigston on Saturday evening at 6.00pm, with the opportunity to celebrate the Sacrament of Reconciliation beforehand at 5.15pm-5.45pm. 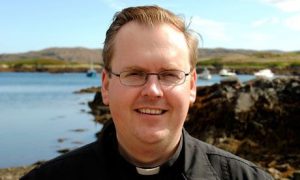